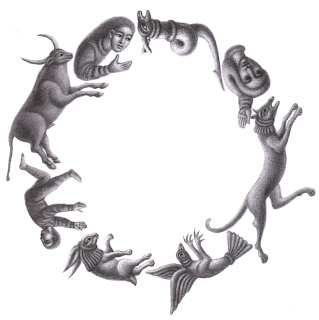 "Chaos and harmony. Darkness and light.
They create the substances mankind is woven from.
Horizontal and vertical. Earth and sky. That is the space of man.
Some seek the centre of these opposites. Some choose an extreme.
Some move in all directions in turn.
At the centre lies the circle. At once enticing and frightening.
We at once approach it and move further away.
Our movement around the circle is a magical game, often called Life."